Between rivers and watermills

Water that runs into the sea

Since prehistoric times, the work of the men and women of Poio has been intricately linked to the sea and the land. A major agricultural development was the introduction of corn cultivation in the late 17th century as it radically changed the rural landscape of Galicia and especially that of the Rías Baixas.

One of the most distinctive features of Galicia’s corn production are the watermills that line the banks of our rivers and streams. These small works of engineering are powered by water which rotates the granite millstones that grind grain into flour.

In Poio there are nine small river courses along which there are dozens of mills that were family or community owned. Some of the most notable examples have been restored and can be visited along two itineraries: the Samieira Watermills route (5.5 kilometres) and the Da Freixa route (1.8 kilometres). 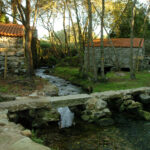 This itinerary passes by 23 mills in total along the course of the river Freiría, also called Rego dos Muíños (River of the Mills) or Rego dos Frades (River of the Friars). According to legend, its name derives from a nobleman who became a friar and who constructed a monastery near the river’s source in O Busto, but no traces of it survive.

The walk begins in Praza de Alfredo Romay, at the so-called Muiño de Cubo de Abaixo and proceeds upstream, keeping close to the riverbank and passing through riverside woodlands with ash, birch, hazel, willow and oak trees. The entire route has been provided with a dirt path for walking along and multiple wooden footbridges to bypass gradients and to ford the stream. Rest areas have also been provided, with tables and benches.

The itinerary begins and ends at the mouth of the Cancela brook, beside the A Seca sports area and the Parque da Memoria (Memory Park), designed by Nobel Prize winner Adolfo Pérez Esquivel. The route runs upstream and, along a stretch of less than one kilometre, passes nine mills, seven of which have been restored. The Muíño de Arriba mill has been entirely reconstructed, including all of the essential machinery for its operation. In addition to the watermills, also worth mentioning are the “pontellas”, small bridges for crossing the river, the cobbled sections of the road, and the channels that carried water to the “rodicios” (waterwheels), such the 40-metre-long channel of Muíño da Bufa.

The path passes through an area of rich ecological importance, among alders, willows, birches and oaks. This is an excellent opportunity to look out for the many species of wildlife, including birds such as wagtails, reptiles such as the Iberian emerald lizard and amphibians such as salamanders and Iberian frogs.